As technology and methods of media consumption progress, sports journalism has lost quality. The industry has been taken over by yelling ridiculous statements and claiming it as a “hot take.”  It seems that websites are more interested in clicks than the quality of content  Once the site is opened, all the user finds is a page plastered with poor content. That is not our goal. We want to bring an end to Clickbait and make sure that anything we post is relevant and worthy of its own page on the internet.

Send any other questions to sidelineintel@gmail.com

Aside from us select few who cheer for a tanking team (go Bulls), this NBA season has been quite thrilling, or at least the top-twenty-or-so teams. This has been especially true for the Western Conference, who’s three-through-eight seeds have been in flux for the entirety of the NBA season. Following the Pelicans’ victory last night, it left two teams to duel for the eight-seed in the West; the Denver Nuggets (46-35) and the Minnesota Timberwolves (46-35).

The two teams have already faced-off three times this season; Minnesota took the first two games, but Denver grabbed their win over the Timberwolves on April 5th in a 100-96 victory.

Considering the opponents, this game has extra value as far as team history is concerned. Denver is riding a wave of success with Nikola Jokic’s development into one of the league’s top-of-the-class big men, attempting to seal its first playoff nod since 2013.

Meanwhile, Minnesota has arguably two of the best prospective talents in the NBA. While since his first overall selection in 2014, he exactly been perfect, Andrew Wiggins still has all-star level talent. His teammate and fellow first-overall pick (class of 2015) Karl-Anthony Towns, on the other hand, is proving to be a premier NBA talent. Towns made the All-Star team for the first time in the midst of an impressive third season. However, Minnesota has not reached the playoffs since 2004. 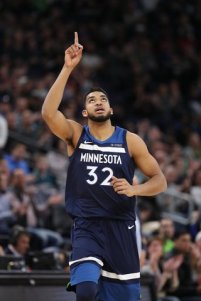 Further, Towns has been impressive against Denver. Recording a double-double in all three games against the Nuggets this season, Towns averages 21.7 points and 12 rebounds against that team. Granted, those are on par with his overall slashline (21.2 PPG, 12.3 RPG), but in the April 5th, pairing, he scored 26 points with 13 rebounds in dominant fashion.

For a span of time, it looked like Minnesota was a safe bet as a top-four, if not top-three seed in their conference. However, who Minnesota trade for Jimmy Butler (22 PPG, 5.3 RPG, 4.9 APG)  injured his meniscus in late-February, as the Timberwolves fluttered to a measly 8-8 over the stretch.

While Butler has returned, he’s been limited to just under 23 minutes in each of the games, despite scoring 18 (at Lakers) and 15 points (vs Grizzlies) respectively in those contests. Butler proved a catalyst and leader on both ends of the floor when healthy. Further, Minnesota did not lose either game to Denver when it had Butler on the floor.

As for Denver, they’ll be hoping for something extra out of 33-year-old Paul Millsap, who played in just 37 games this season after signing a 2-year, $61 million deal with the Nuggets in July of 2017. While Millsap has only partaken in 37 games this season, the Nuggets have been noticeably better with his presence on the court. The team is 22-15 with the versatile big man and 24-20 without. Plus, Milsap has played just one game against Minnesota this season, that being the victory last week.

While the star power certainly aligns with Minnesota, this game is going to be close; these teams are in the midst of ugly playoff droughts. For the Timberwolves, losing this game could severely loosen Tom Thibodeau’s job security as head coach. Meanwhile, for Denver head coach Mike Malone, it could mean the difference of chasing a crown or reshuffling the chips in the offseason.

However, I’m convinced that Denver has the secret weapon that can decide the outcome of this game; that weapon his Gary Harris. In his fourth year of NBA action, Harris continues to climb, averaging a career-best 17.6 point per contest. In his lone game against Minnesota this year, he scored a sour 10 points in the team’s February loss.

Ending a string of 11-consecutive games missed due to injury, Harris returned to the floor on Monday for the Nuggets’ 88-82 victory over the Portland Trail Blazers. He had 12 points on 4-of-9 shooting in his 18 minutes. Tonight, he’ll have the chance to do something special; his shooting can be sweet. Although, he will face Jimmy Butler, who’s known for his tough-defending. This is his first chance since coming into the NBA to prove his stature and I expect to see him rise to the occasion.

I’d expect many basketball fans will find a way to tune into this 8PM match-up, despite ESPN’s choice to show 76ers-Bucks instead. Do not miss this game, basketball fans, this is the one people are going to be talking about tomorrow.

View all posts by Sideline Intel