As technology and methods of media consumption progress, sports journalism has lost quality. The industry has been taken over by yelling ridiculous statements and claiming it as a “hot take.”  It seems that websites are more interested in clicks than the quality of content  Once the site is opened, all the user finds is a page plastered with poor content. That is not our goal. We want to bring an end to Clickbait and make sure that anything we post is relevant and worthy of its own page on the internet.

Send any other questions to sidelineintel@gmail.com

The reigning WNBA champs added another brick in the wall of their dominant dynasty of the decade.  The Minnesota Lynx have enjoyed such consistent success that it is easy to highlight their strengths, and difficult to pinpoint their weaknesses.  They are the Vegas favorite to win it all this year, and this first edition of the WNBA team preview will look at a few of the reasons why.

We must start our conversation with Sylvia Fowles.  The 6’6” 212 pound center is the reigning league and finals MVP.  At 32, this will be her tenth season, and fourth with Minnesota. Despite being past the typical prime of a basketball player, you will have to search long and hard for signs of her slowing down.

‘Sweet Syl’ was an offensive powerhouse in the paint for the Lynx in 2017.  Her 18.9 points per game was good for fifth best in the league, and nobody outpaced her (and Jonquel Jones, Sun) in offensive rebounding at 3.6 per night.  Defensively, only Mercury’s Brittney Griner averaged more blocks (2.9), and Fowles helped to lock up the low post with 2 blocks per game. 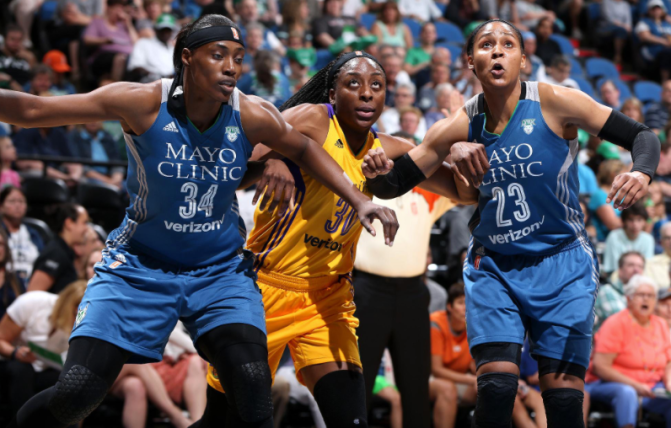 Another huge asset that the Lynx lean on is Lindsey Whalen.  Whalen is responsible in large part for the winning culture that Minnesota embodies and exudes.  Last season, the Lynx were 20-2 in games she started (Whalen missed 12 games due to a hand fracture), and benefited from a clutch 17 point performance by Whalen in game two in the finals after the Lynx had lost the opener to LA.

The winningest player in WNBA history is a Minnesota native that has helped carry the Lynx through their odd year dynasty, winning championships in 2011, 2013, 2015, and 2017.  It is often said of smart players, they are “like a coach on the court.” However, this summer, opponents will be able to say that the Lynx actually have a coach on the court. Whalen recently accepted the head coach position for the University of Minnesota women’s basketball team.  Her history of success and unmatched basketball IQ present a persistent and slippery challenge for a league still trying to figure out how to slow the Lynx’s roll.

Of course, we must include Maya Moore, who wreaks havoc everywhere on the court.  The 2011 first overall selection from Geno Auriemma’s championship mill in Connecticut, Maya Moore helped light the fire that has been burning steady for seven years.  Last season she was just as hot. The second Minnesota member of the top ten scoring list averaged just over 17 PPG, grabbed 5 RBG, created 3.5 APG, and swiped nearly2 steals every night.  She is a dynamic athlete and matchup nightmare.

As promised, the areas in which Minnesota are not great lie in free throws and turnovers.  They find themselves in the middle of the pack with 18 FTA per game, and at the bottom third of the list with 14 TO per game.  If they attack the basket more often and control the ball more, they can take control of the pace and flow of a game even more so.

With a tried and true formula, consistency, low turnover, and a strong winning culture, the Lynx are firing on all cylinders heading into 2018.  Expect nothing less than a deep playoff push, capped by a likely finals appearance.

View all posts by Drew Fabricius